A deep secret is hidden behind the snake’s tongue being cut into two parts, which is mentioned in the Mahabharata. The Mahabharata, written by Maharishi Ved Vyasa, has a very interesting story involving the tongue of snakes.
According to the Mahabharata, Maharishi Kashyapa had 13 wives. Kadru was also one of them. All snakes are children of Kadru. At the same time, another wife of Maharishi Kashyap’s name was Vinata, whose son is Birchraj Garuda. Once both Maharishi Kashyap’s wives Kadru and Vinata saw a white horse. On seeing him, Kadru said that the tail of this horse is black and Vinata said that it is not white. Both were bet on this matter.
Then Kadru asked his Naga sons to reduce their size and wrap it with the tail of the horse so that the tail of the horse would look black and win that bet. At that time some Naga sons refused to do so. Then Kadru cursed his sons that you will be consumed in the sacrifice of King Janmejay Yogya.
Hearing the curse, all the snake sons clung to the tail of the white horse according to their mother, causing the tail of that horse to appear black.
Losing the bet, Vinata became Kadru’s maid. When Vinuta’s son Garuda came to know that his mother had become a maid, he asked Kadru and his Naga sons to bring me such an item so that my mother would be freed from your slavery. Then the Naga sons said that if you bring us nectar from heaven, then your mother will be freed from the slavery of our mother.
According to the Nagputras, Garuda brought the nectar Utn from Heaven and placed it on a Kusha (a kind of Streaked grass) He asked all the serpent to take a bath before drinking the Nectar. At the bechet of Garuda all the snakes went to bathe, but in the meantime Devraj Indra came there and again went to heaven with Nectar urn. When all the Snakes came after bathing, they saw that Kusha did not have a Nectar Vase.
After this all the Snakes Started licking the grass (kusha) on which the nectar was placed. They felt that the small fraction of nectar must fallen that place. By doing this they didn’t get Nectar itself, but Due to grass snake tongue broke into two pieces.

The Manipuris, from a linguistic point of view, are divided into two groups, namely – the Meiteis and the Bishnupriyas. The Meiteis entered Manipur from the east; their Language is of the Tibeto-Burman group. The Bishnupriyas entered Manipur from the west; their language is of the Indo-Aryan group. “Manipuris are divided into two main tribes – the – khalachais, who call themselves Bishnupriyas, are supposed to have been the first cultural race and the Meitheis or Meetheis, who call themselves real Manipuris are supposed to have been next immigrants.”- said Shri R. M. Nath in his Book The Background of Assamese culture. In Linguistic Survey of India, 1891 Sir G. A. Grierson recorded their Language as”Bishnupriya Manipuri”. Sir Grierson what he recorded in ‘Linguistic Survey of India’ Vol.. V, Part 1, is “A tribe known as Mayang speaks a Mongrel form of Assamese by the same name. They are also known as Bishnupriya Manipuri.” Dr. Suniti kumar Chatterji also calls the Bishnupriya Manipuri (BPM) language simply “Bishnupriya” or “Mayang”.But DR KP sinha says, “Mayang” is a misnomer for this language. The Bishnupriya Manipuris never called themselves as “Mayang”.It is term used by the Meiteis in a degrading sense to denote Indian people outside Manipur. In Meitei, the “Mayang” means foreigner, westerner, just as the Bishnupriya Manipuris called the Meiteis “Khai”, which stands for Thai or Tribe meaning. It is, however, clear that both these two languages were formed in the soil of Manipur.

Works of both Indian and European Scholars bear testimonies to the existence of Bishnupriya Manipuri in Manipur in the earliest time. The “Khumal Purana” Of Pandit Navakhendra Singh refers to the existence of Bishnupriya Manipuri language in Manipur during the reign of Garib Nawaj. Pandit Navakhendra states – “ The main stream of Manipuri, the Aryan origin people, the khumal, Moirang, Angam and Luwang who are following the Vedic cult from the epic ages being the devotees of Lord Vishnu distinguish themselves from the Meitheis”. The language originated and developed in Manipur and was originally confined to the surroundings of the Loktak Lake.

Other authorities such as An account of the valley of Manipore by Col. McCullock, Descriptive Ethnology of Bengal by E. T. Dalton and the Linguistic Survey of India by George Abraham Grierson mention that the language was in existence in Manipur before the 19th century. Dr. Grierson calls the language as “Bishnupuriya Manipuri”, while some other writers call it simply “Bishnupriya”. The principal localities where this language was spoken are now known as Heirok, Mayang Yamphal, Bishnupur, Khunan, Ningthankhong, Ngaikhong, Thamnapoxpi.

Places Where Bishnupriya Manipuri is Spoken

Bishnupriya Manipuri was originally confined only to the surroundings of the Lake Loktak in Manipur. The principal localities where this language was spoken are now known as Khangabok, Heirok, Mayang Yamphal, Bishnupur, khunan, Ningthankhong, Ngakhong,Thamnapoxpi and so on. However, later a great majority of speakers fled away from Manipur and took refuge in Assam,Tripura, Sylhet and Cachar during eighteen and nineteenth century due to internal conflicts among the prices of Manipur and due to Burmese attack. Consequently, it was difficult for the small number of Bishnupriyas who remained in Manipur to retain their language in face of the impact of Meitei, although Dr. G.A. Grierson, in 1891 found the existence of a considerable number of speakers in two or three villages near Bishnupur, locally known as Lamangdong.( LSI, Vol -V, Page 419). This Language is now spoken in parts of Assam, Tripura, Manipur( Jiribam Sub-division) in India ,in Bangladesh, in Burma and other overseas countries.

There are a large number of Bishnupriya Manipuri people settled in Assam ages ago, particularly in the districts of Cachar,Karimganj and Hailakandi. This people are counted as one of the major group of people in Cachar and Karimganj districts.

In Myanmar Tbangdut, Mawa Kalewa and Bumnuk etc. are the Bisbnupriya Manipuri localities. And in case of the United States of America, Canada, Germany, Middle East and Austria, there are very few Bishnupriya Manipuris recently settled there for earning a living there.

There are about 2,00,000 people living in Manipur, mainly in Khangabok, Heirok, Mayang Yamphal, Bishnupur, Khunan, Ningthankhong, Ngaikhong,Thamnapoxpi area, who speak Meitei but are known as Bishnupriyas. And, these people, even now think that their original language was Bishnupriya. Their facial feature and dark complexion clearly indicate that they are immigrants from the west.

As regards to the origin of these two dialects, tradition says that once the queen of Manipur requested the king to give her a few village. The request was granted and in time the language of those villages developed in a different direction; the village in the possession of the queen were known as Madoi Gang or The villages of the Queen. The other villages remained in the possession of the king and known as Rajar Gang or The villages of the King.

These two dialects, however, cannot be located in distinct areas, but exists side by side in the same localities. The Madoi Gang dialect has received a greater number of Meitei words and the pronunciation also the influenced greatly

Whether BPM is a dialect of any other language

Some scholars are inclined to call the Bishnupriya Manipuri language to be a dialect of Bengali or Assamese which was truly irresponsible. Dr. Suniti kumar Chatterjee, a recognized phonetician, listed the BPM language to be a dialect of Bengali whereas, Dr. Maheswer Neog claimed it as a dialect of Assamese. Both being not keen on the matter, did not do justice to Bishnupriya Manipuri people and the language. Their assumptions later caused contradiction about the origin of Bishnupriya Manipuri language. But the assumptions were proved to be baseless, illogical and injustice according to scientific research and observation of morphology, vocables and phonology of BPM language-

Firstly, mere similarities of a few elements are not sufficient to prove that BPM is a dialect of one or that other language. Secondly, Dr. Chatterjee in his phonetic analysis, had used a peculiar version of Bishnupriya Manipuri language, which is much different from the original BPM language that is being spoken by the Bishnupriya Manipuri locality in Assam, Tripura, Manipur or Bangladesh . Lines like “Manu agor Puto Dugo asil….” are not syntactically and grammatically the correct form of BPM. Thirdly, There are a numerous dissimilarities between Bengali /Assamese and BPM such as –

Big Thanks to Man of Letters.

Bishnupriya Manipuri “Khuttei Dibosh” on 14th August, tirelessly promoted by our youngsters Bijan and Krishna , ended up with a massive success in the internet world. Initially, i was not very much convinced with the gravity of this idea, but over the time, seeing the sincere approach of the duo, I soon realised that this day is going to be something extraordinary and here it is .. Khuttei Dibosh all around, flooding not only in BMDF but through out the internet. A dibosh full of happiness and togetherness, just like another BM festival.Forget its cultural significance as of now, but not to forget, the noble attempt of the youngsters must be acknowledged. Our youngers united us within a simple lining of a khuttei. Thanks for giving us khuttei dibosh. Hats off Bijan Sinha and Krïshñá Sïñhá. 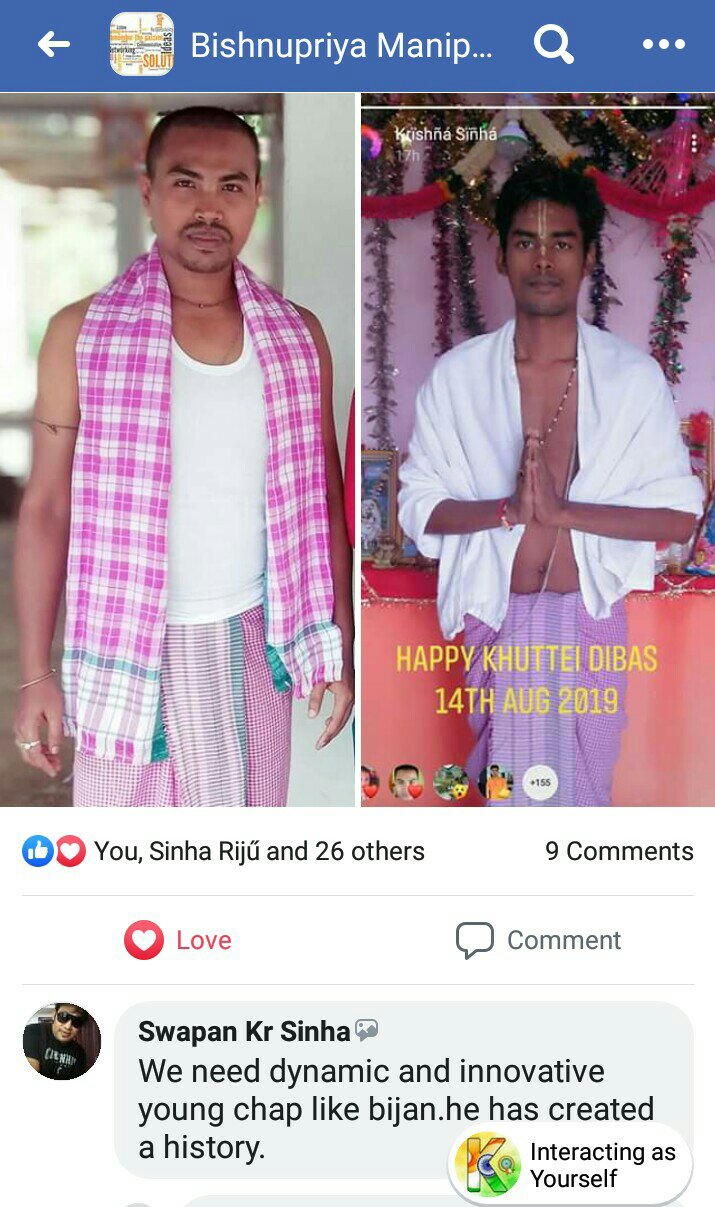 This is a text widget. The Text Widget allows you to add text or HTML to your sidebar. You can use a text widget to display text, links, images, HTML, or a combination of these. Edit them in the Widget section of the Customizer.

Qurani Dua For Love back and All life problem Solution

Inspiring others to live life on their own terms by improving mental health, increasing motivation, and sharing personal passions.

Words To Think On

True wealth is the wealth of the soul

Bio-Blogger is an excellent source for collaborations and to explore your businesses & talents.

writes one short story every week

All About Yoga Practice, Poses, and Benefits

Listen to your inner self..it has all the answers..